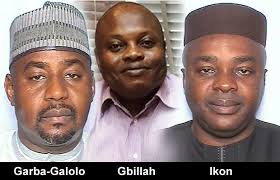 The minister of Foreign Affairs, Geoffrey Onyeama, has said the allegation of sexual misconduct brought against three members of the House of Representatives by the immediate past United States Ambassador to Nigeria, James Entwistle, lacks evidence.

Onyeama, speaking before the House of Representatives Committee on Ethics and Privileges stated that the allegation was defamatory and could be pursued at the law court if the accused lawmakers so desired.

He pointed out that from his interaction with the former ambassador, the letter to the Speaker of the House of Representatives, Yakubu Dogara, was purely private and diplomatic, which was just to inform him about the allegations and the need to guide against future occurrence that could tarnish Nigeria’s image.

He claimed that the Ambassador did not accept responsibility for the leakage of the letter to the public but apologized for not using the formal diplomatic channel of writing the Speaker through the Ministry of Foreign Affairs.

Entwistle, in his letter to Dogara, had alleged that the members behaved inappropriately towards a hotel housekeeper and solicited the services of car park attendants to get prostitutes for them.