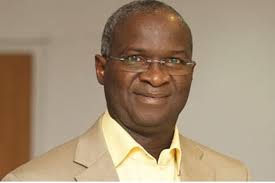 The Federal Government has formally inaugurated the construction of six billion Oyo-Ogbomoso expressway, and promised to ensure its completion during the administration of President Muhammadu Buhari.The reactivation of the express road was kicked off by Oyo State governor, Senator Abiola Ajimobi, at Elete, Atiba Local Government Area of the state.

Fashola assured the people of the state that the job will be done according to the specification of the ministry, noting that the contractor will be forced to give the nation, value for the money. Lai Mohammed affirmed that the government of President Buhari will put adequate structure that will facilitate development on ground.

Ajimobisaid the road, when completed, will lead to rapid economic development across states in the country. The Chairman, Senate Committee on Works, Senator Kabiru Gaya, said the road will be completed within three years.