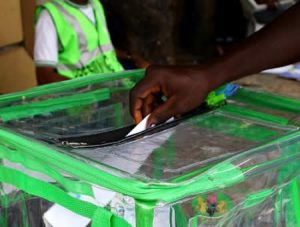 The All Progressives Congress showed superiority over its arch-rival, the Peoples Democratic Party as it emerged winners in Wednesday’s rerun elections in four Area Councils of the Federal Capital Territory, Abuja.

The PDP, which was the dominant party at the councils, lost at all the six area councils where the election was eventually conducted.

The Independent National Electoral Commission had earlier announced the result of two other area councils on Sunday, a day after the election was conducted.

The result of the election showed that the relatively unknown political party, the All Progressive Grand Alliance emerged winner in one of the area councils.

They commission had on Sunday declared elections in these councils as inconclusive.

INEC said it declared the elections inconclusive as a result of violence, over voting and non-use of Smart Card Readers or accreditation of voters, and ordered a rerun in 39 polling units in 20 Registration Areas.
‎
In the result released on Thursday, INEC declared the APC candidate, Ibrahim Adamu Candido winner of AMAC with 27, 482 votes.

He defeated the candidate of APC, Abubakar Jubril who got 14,569 votes.

The PDP, which won five Area Councils in 2013, could not win any chairmanship position in the election this year.

Senate Minority Whip, Senator Philip Aduda, who represented FCT in the Senate on the platform of PDP, alleged sabotage against the party.

He alleged that there were reports of sabotage against his party.

Aduda said, “We know that there are lots of sabotages that are being put in place so that there are delay so that where we have strongholds we might not have the opportunity and all that.”