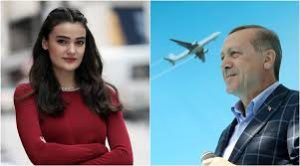 A former Miss Turkey has been convicted of insulting Turkish President Recep Tayyip Erdogan and handed a fourteen-month suspended prison sentence. Merve Buyuksarac was sentenced by a court in Istanbul on Tuesday, for a poem she shared on social media in 2014.

The suspension of her sentence means she will not serve time if she does not repeat her action for a period of five years. Buyuksarac was jailed for a brief time in 2014 for sharing the poem which prosecutors said insulted Erdogan, who was prime minister at the time. The twenty-seven-year-old model’s lawyer, Emre Telci, said a formal complaint to the verdict will be filed and that the case will be appealed at the France-based European Court of Justice, the Strasbourg.