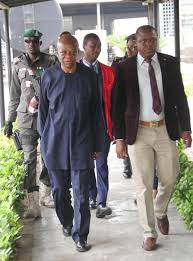 The Economic and Financial Crimes Commission on Thursday re-arraigned a former chairman of the Independent National Electoral Commission, Prof Maurice Iwu, for an alleged fraud of one-point-two-three billion naira. Iwu was re-arraigned on four counts before Justice Nicholas Oweibo of the Federal High Court in Lagos.

According to the EFCC, Iwu, between December 2014 and March 27, 2015, aided the concealment of the sum in the account of Bioresources Institute of Nigeria Limited in the build-up to the 2015 general elections in which President Muhammadu Buhari defeated then-incumbent President Goodluck Jonathan.

The EFCC said Iwu ought to have reasonably known that the sum formed part of the proceeds of fraud. But the defendant pleaded not guilty to the charges. Justice Oweibo adjourned till November 25, 2019, for the commencement of trial.