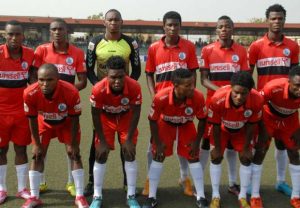 Lobi’s influential strikers, Kingsley Eduwo and Anthony Okpotu, will both miss the game that comes up on Sunday at the Aper Aku, Stadium, Makurdi. Both players are suspended having accumulated five yellow cards thus far this term.

The two players have proved to be important members of Godwin Uwua’s Lobi Stars with Okpotu particularly in fearsome goal scoring form this season.