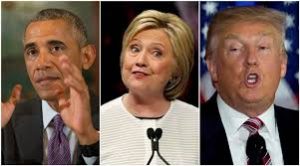 Donald Trump backtracked today from his assertion that President Barack Obama and Hillary Clinton founded the Islamic State group, saying he was just being sarcastic. As he often does, the Republican presidential nominee accused the news media of misconstruing something he said.

In this case he targeted the CNN, although his comments on the jihadist group and the president were picked up across the news spectrum. Trump first made the accusation on Wednesday at a rally in Florida, and repeated it in interviews on Thursday.

Mr. Trump has used the sarcasm defense before. In late July, when he suggested that the Russians should hack Mrs. Clinton’s emails, he later explained his remarks by saying he was being sarcastic.

Some Democrats scoffed at Mr. Trump’s excuse as more evidence that he is unfit to be president.