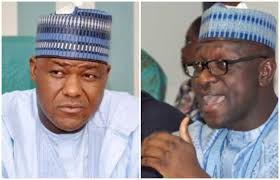 Jibrin has however said he will never apologize to Dogara, insisting that he won’t back down on his allegations. Jibrin, who was removed as Chairman of the Appropriation Committee last week, had accused Dogara of removing him because he refused to allocate projects worth forty billion naira to the speaker in the 2016 budget. Jibrin also explained via tweets that he is working to get the Economic and Financial Crimes Commission and Independent Corrupt Practices Commission to investigate Dogara.