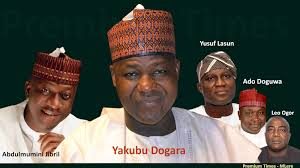 The Speaker of the House of Representatives, Yakubu Dogara, says no member of the National Assembly can be investigated or prosecuted for performing the legislative duty of passing an Appropriation Act.

The Speaker made the declaration on Thursday at an interactive session with civil society organizations while appraising the first year of the legislative agenda of the 8th House of Representatives.

Dogara maintained that the Appropriation Bill is just like any other bill which must be subjected to normal legislative processes and scrutiny. He also said that the adjustments in the 2016 Appropriation Bill by the House of Representatives was to accommodate the interests of the people.

In reaction to Dogara’s statement, a former Chairman of the House Committee on Appropriation, Abdulmumin Jibrin, said he was alarmed that Dogara was defending padding when he had initially denied that there were insertions made into the budget. He claimed that Dogara’s stance was “a diversionary plan to mislead the public, avoid the anti-corruption agencies’ probe and buy time to cover up their dirty mess.”