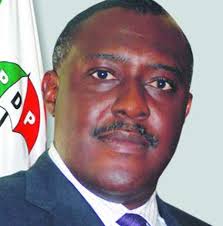 Justice Okon Abang of the Federal High Court, Abuja rejected the application by the National Publicity Secretary of the Peoples Democratic Party (PDP), Olisa Metuh to compel the Economic and Financial Crimes Commission (EFCC) to immediately respond to his fundamental rights enforcement suit.

Metuh’s lawyer, Mr Ifedayo Adedipe (SAN), filed the suit to challenge the continuous detention of his client without a formal charge and therefore made an oral application for abridge of time to expedite hearing of the substantive suit. He urged the court to stand the case down for some hours to allow the EFCC file its reply.

EFCC lawyer, Mr Rotimi Jacob (SAN), however opposed the application, on the ground of fair hearing. He urged the court to dismiss such attempt that will deny the respondent the benefit of the five days allowed by the rules of the court to file its response.

In a short ruling, Justice Abang Okon held that the rules of the court do not allow for such benefit as requested by the applicant and dismissed the applicant’s request.

The judge adjourned till the twentieth of January for hearing.

Meanwhile, the EFCC yesterday also alleged that a former Chairman, Board of Trustees (BOT) of the PDP, Chief Tony Anenih, benefited from the four hundred million naira allegedly received by Metuh from the immediate past National Security Adviser (NSA), Sambo Dasuki. It was however silent on why Metuh gave him money and for what purpose.