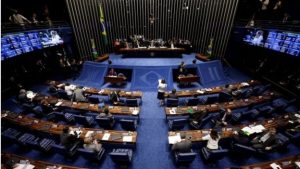 Brazil’s Senate is debating whether President Dilma Rousseff should face a full impeachment trial. If a simple majority votes in favour, as is expected, Miss Rousseff will be automatically suspended from office.

Miss Rousseff made a last-ditch appeal to the Supreme Court to stop proceedings, but the move was rejected. Eleven hours after the debate started, half of the 70 senators who had registered to speak had had their say. Of those thirty-five, twenty-eight spoke in favour of an impeachment trial and seven against. The president is accused of illegally manipulating finances to hide a growing public deficit ahead of her re-election in 2014, which she denies.