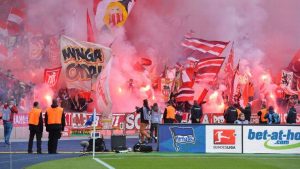 Bayern Munich have been fined forty-five thousand Euros by the German FA following fan troubles during their away game at Hertha Berlin last season. In late April, a number of Bayern fans used flares in the away section at Hertha’s Olympiastadion and delayed kick-off for ninety seconds.

Following the match, some supporters clashed with police and stewards in the area around the stadium, and twenty-seven were detained. The German champions issued a media statement condemning the events, saying they want to clearly distance themselves from any supporters willing to use violence.

Flares and other pyrotechnics are not permitted at stadiums in Germany, although earlier this decade fans campaigned for their controlled use and held talks with the German football’s governing body.

Those talks broke down in late 2011 after the German FA ended the dialogue due to the unclear legal situation surrounding the use of pyrotechnics in stadiums.