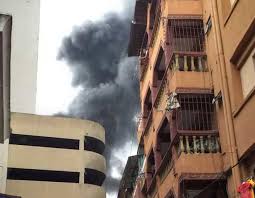 Tragedy struck late Tuesday evening when a yet to be identified policeman and another person, reportedly died in the inferno that engulfed the Mandillas Building at the popular Balogun Market on Lagos Island. The fire which was yet to be finally put out at press time, this morning has spread to adjoining building with firefighters and other rescue team battling to curtail it from causing further damages.

The policeman was said to have lost his life when a section of the building collapsed on him late Tuesday evening, as firefighters continued with their efforts to put out the raging fire.

Meanwhile, the Director-General of Lagos State Emergency Management Agency, LASEMA, Dr Femi Oke-Osantyintolu, confirmed that a simultaneous fire incident was also reported at a building in the nearby Dosunmu market, but had already been put out by firefighters.

Oke-Osanyintolu, appealed to the traders to stop putting generators and petrol inside their shops to avoid similar accidents in the area. Iyaloja of Lagos, Chief (Mrs) Folashade Ojo, who also visited the scene, called for regular public power supply to prevent indiscriminate use of generators causing fire outbreaks.