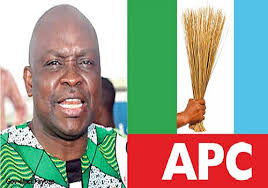 The All Progressives Congress (APC) in Ekiti State has accused Governor Ayodele Fayose of conducting himself in a manner that threatens national security.
It said the governor’s recent utterances and actions suggest acts of sabotage targeted at rendering national institutions ineffective to perform their statutory roles for effective government in a federal set-up.

Publicity Secretary, Taiwo Olatunbosun, said in a statement on Sunday that Fayose’s unguided statements had exposed him as a man fighting a lone battle against the Federal Government over selfish motives to put millions of Nigerians in jeopardy of instability in an already tottering economy.
Citing his death wish for President Muhammadu Buhari at a rally held at Fajuyi Square, Ado-Ekiti, to welcome the detained member of the House of Assembly, Akanni Afolabi, to the state capital, Olatunbosun regretted that besides the governor inciting Ekiti people against the operatives of the Department of State Security (DSS), he had also for umpteenth time threatened to bring Buhari’s government down if any attempt was made to probe sundry alleged crimes leveled against him.

“We have heard of reports of Governor Fayose inciting the people to stone the operatives of the DSS anywhere they are seen. This is besides saying many unprintable things about the President, such as saying that he would soon die, and declaring the DG of DSS, Lawal Musa Daura, a personal non-grata in Ekiti State.

“It is regrettable that Fayose cannot separate his personal views as a man constantly at war with the Nigerian law from the views of lawful Ekiti people, who are ready to submit themselves to the Nigerian law where the rule of law and good governance flourish,” he said.

Accusing the governor of running a government built on his personal image, the APC spokesman said this misconception had “robbed Ekiti people the quality leadership with the right mindset to see governance beyond the prism of self-glorification”.
“This failure to see governance beyond personal appeal of the governor is costing our state good governance for the development of our people and her deserved place of honour in this country. That is why the governor is wasting state resources on helicopter charter to ferry an accused person, Akanni Afolabi, from Abuja to Ekiti after which he took six pages of several newspapers on frivolous adverts to publish court records on the accused’s bail application and topped it with the donation of a new car to same Akanni, who is still under investigation over several criminal cases,” he explained.

He added: “Governor Fayose is overwhelmed with promoting cloudy characters with several alleged crimes hanging on their necks far above Ekiti academic pride of the century, Ayodele Dada, who bagged the best graduating student award at the University of Lagos with a record 5.0 GPA.

“We are not surprised at the governor’s beatification of crime in this instance because you can only give what you have and gold is usually sold to the person who knows its value. That is why Fayose would prefer to celebrate thugs and roughnecks to celebrating Ekiti golden boy that has put Ekiti State on the map of academic honour at the University of Lagos.”

He urged Nigerians not to be misled by Fayose’s many lies against the agencies of government in the prosecution of alleged crimes by the governor and his supporters, regretting that many Nigerians with scant knowledge of the governor’s politics had been deceived into believing the stories of alleged invasion of the House of Assembly by DSS to abduct the lawmakers.

“Besides suborning the staff of the Assembly to lie against DSS by presenting purported spent bullets, there is no evidence to show the world that the DSS actually invaded Ekiti House of Assembly after police report on the matter and evidence by workers proved that there was no invasion of the Assembly by DSS,” Olatunbosun explained.

Urging that Fayose’s threats should not be taken lightly or dismissed as empty boast, Olatunbosun urged security agencies to pay more attention to the governor by putting him under close watch to forestall his threat to Buhari’s government.

“Fayose has appointed himself national opposition leader just because he wants to help himself in his many criminal cases against the nation’s law. That is why he will never wish Nigeria well to have country where the law works. But no amount of stunts as a self-appointed opposition leader will stop Fayose from facing the music for his serial crimes against Nigerian state.