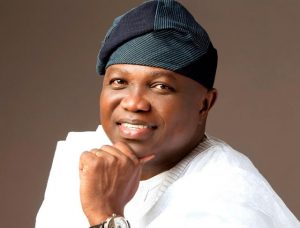 Governor Akinwunmi Ambode of Lagos State says the state government will sign a Memorandum of Understanding with investors for the construction of the Fourth Mainland Bridge before the end of May 2016.

The bridge, which is expected to cost over N240bn, has been in the plan of the state government for the past 12 years.

The governor, who spoke at a town hall meeting in Ikorodu, assured residents that once the MoU was signed, work would begin on the bridge.

He said, “Many investors have shown interest in the actualisation of our dream for the Fourth Mainland Bridge which will run from Ajah to Ikorodu, to Isawo and berth at Ojodu, Ikeja and the Lagos-Ibadan Expressway.”

The governor said the state had achieved a major breakthrough in security, adding that since the inauguration of the N4.78bn security equipment, crime had reduced in the state.

“The quick response in the rescue of the kidnapped Ikorodu schoolgirls and the quelling of the Mile 12 clash are testimonies of the effectiveness of the security system in Lagos.

“We are happy to report that crime rate has reduced in the last three months,” he added.

Ambode said the law restricting motorcycle riders from some roads in the state must be enforced, including on the Ikorodu Road.

He said, “Okada (motorcycle) is dangerous to our safety and security. But we, as a government, must create an alternative.

“With what we have provided in the Mile 12 area, I don’t think anybody will want to ride okadaagain; it will fizzle out before I take my final action.”

The governor said his administration had recorded success in its Light Up Lagos project as 68 rural communities were recently connected to the national grid, while street and road lighting were ongoing across the  state.

Ambode added that the Light Blue Rail project was about 85 per cent completed.

He said the government had paid N561m for 46,000 pupils in public schools for their 2016 West African Senior  School Certificate Examination.

The governor added that his administration had considered expanding the Ikorodu-Imota-Itoikin-Agbowa Road to an eight-lane expressway under the Build-Own-Transfer scheme.

He said, “We don’t have the money, but we have investors who have shown interest. We are going to turn it to an eight-lane road.”