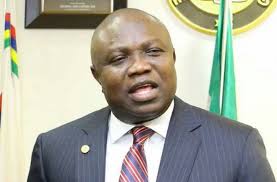 The immediate past Governor of Lagos State, Mr. Akinwunmi Ambode, has denied involvement in the Nine point nine billion naira fraud said to have been discovered by the Economic and Financial Crimes Commission.

Ambode said none of his accounts contained Nine point nine billion naira let alone being frozen by the EFCC.
He said in the spirit of Sallah and having served Lagos State well, his record was clear.
In a statement on Friday by his media aide, Habib Aruna, Ambode said he did not intend to join issues with the anti-corruption agency as there had not been any communication between him and the commission on the issue.
According to the former governor, the accounts frozen by the Federal High Court belong to the Lagos State Government and not him or any individual.
“Those accounts were opened in the course of normal operations by the Lagos State Government for its administrative purposes and not for the former governor’s personal transactions as was being wrongly insinuated and have been operated to ensure smooth operations of government activities by previous and present administrations. The former governor was not and will never be involved in any unauthorised use of government property and resources.