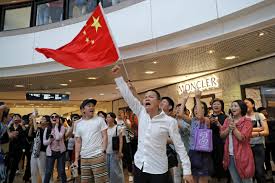 A Hong Kong pro-democracy protester has been shot in the chest after a police officer opened fire during clashes on Tuesday, as China celebrated the 70th anniversary of the communist-led government in Beijing. The incident was the first time a protester has been shot, in an escalation of the months-long unrest that has rocked the city.

Report said that the 18-year-old protester is in “critical condition” undergoing emergency surgery at a hospital.

A video of the incident, showed a dozen black-clad protesters hurling objects at a group of riot police pursuing them. In the video, one officer, who is surrounded, draws his revolver and points it at the group. He fires and one protester collapses on the street while others flee. Police addressed the shooting and called on rioters to stop “illegal acts”.

Over the past 16 weeks, Hong Kong has been in the throes of anti-government protests – triggered by a proposed bill that would have allowed the extradition of accused individuals to mainland China for trial. The protests have since morphed into a wider movement for democracy.