Ekweremadu not our anti-corruption ambassador – EFCC

The Economic and Financial Crimes Commission says Deputy Senate President, Ike Ekweremadu, is not an anti-corruption ambassador of the agency. 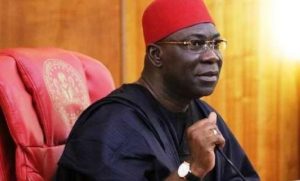 The spokesperson for the EFCC, Mr. Wilson Uwujaren, while pleading with the public to disregard the report stating otherwise.   in a statement also stated that the EFCC National Assembly Liaison Officer, Suleiman Bakari, went beyond his assignment by decorating Ekweremadu.

He also  said  that  as an anti-corruption agency that could arrest any individual found wanting, they could never name anyone as its ambassador.