The Managing Director of the International Monetary Fund (IMF) Christine Lagarde on Wednesday met with leaders of the National Assembly and called for the removal of fuel subsidy. According to her, not only do fuel subsidies harm the planet, but they rarely help the poor, while benefitting the rich. Speaking during a meeting with some lawmakers from both the lower and upper legislative chambers, she also called for a review of Nigeria’s tax regime.

In another meeting with the Central Bank Governor, Largade called for increased funding for the nation’s real sector. The former French finance minister expressed confidence in the Nigerian economy but says she expects more stability in the system. The Central Bank Governor promised to fashion out modalities in getting the commercial banks to work in that direction. 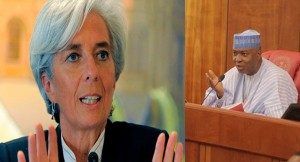