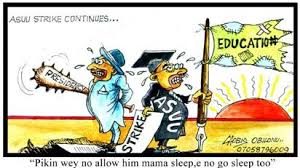 The Academic Staff Union of Universities (ASUU) has expressed concern over the continuous release of incomplete salaries to public universities.

While announcing the union resolved to quit contributory pension scheme, Abdullahi said that ASUU plans to establish its own pension company to be known as Nigerian Universities Pension Company (NUPENCO).