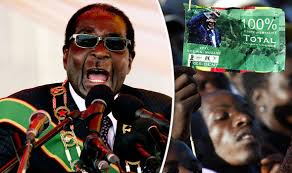 Zimbabwean President Robert Mugabe returned home from abroad in a jovial mood on Saturday, pouring scorn over the latest rumours of his health and joking that he had died and was resurrected.

The ninety-two-year-old came back to the grim reality of rising public anger over an economic meltdown widely blamed on his misrule, with violence erupting a week ago when police fired teargas at opposition leaders and protesters.

Reports that Mugabe’s health is declining have become common in recent years, but the veteran politician, in power since independence from Britain in 1980, often refers to himself as “fit as a fiddle”.

The new ill-health reports were partly fed by Mugabe’s early departure from a regional summit, with many saying he had been rushed for medical treatment in Dubai. Mugabe however told journalists at Harare international airport that he had gone to Dubai on a family matter concerning one of his children.