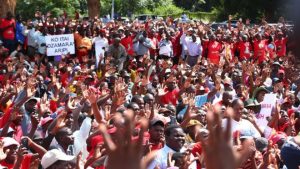 The march went ahead after a ruling by the High Court. Police had initially denied permission.

It is the biggest such protest in many years.

“Mugabe has no solution to the crisis. We are here to tell Mugabe and his regime that you have failed,” Mr Tsvangirai said in a brief speech to supporters.

“This is about jobs and improving the economy, which is in dire straits,” he added.

Mr Mugabe has been in power since independence in 1980.

He remains active but his increasingly fragile health has sparked speculation over his successor and the direction the country will then take.

Zimbabwe’s economy has struggled since a government programme seized most white-owned farms in 2000, causing exports to tumble.

Unemployment and poverty are endemic and political repression commonplace. Many Zimbabweans have left the country in search of work in South Africa.