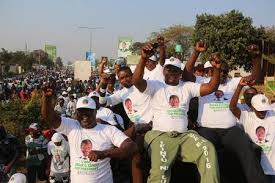 Zambian President Edgar Lungu has said his inauguration will be delayed until a court rules on a challenge from his main election rival who said the vote was rigged. Results on Monday showed Lungu won fifty-point-three-five percent of the vote against forty-seven-point-six-three percent for opposition leader Hakainde Hichilema.  Hichilema has said he will challenge the result, alleging fraud during the vote counting process after Thursday’s election.

Police said they arrested about one hundred and fifty protesters in opposition strongholds in the southern African country, while one ruling party supporter was detained on Monday after torching a police vehicle during celebrations. A rule introduced in January says the winner of a presidential election cannot be sworn in if the vote is contested in a court, which has two weeks to decide on such a petition.