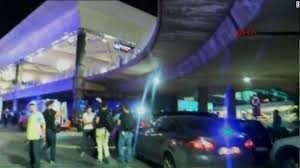 Politicians around the world have expressed shock and condemnation after three suicide bombers attacked Istanbul’s largest airport, killing at least thirty-six people and wounding many more.

Turkish officials said yesterday evening’s attack at Ataturk Airport was likely carried out by the Islamic State group. There has been no claim of responsibility.

Turkey’s President Recep Tayyip Erdogan said in a statement that the attack, which took place during the holy month of Ramadan, shows that terrorism strikes with no regard for faith and values. UN Secretary-General Ban Ki-moon condemned the terrorist attack and called for the perpetrators to be identified and brought to justice.

In the US, White House spokesman Josh Earnest expressed Washington’s “steadfast support” for Turkey in the wake of the attack, while US Secretary of State John Kerry said the first challenge that the world needs to face is countering non-state, violent actors.