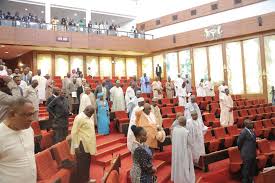 THE Senate disclosed, yesterday, that senators unanimously rejected the proposed loan to purchase their vehicles, saying none of the 109 lawmakers was interested in it. Speaking with journalists in Abuja yesterday, Chairman, Senate Committee on Senate Services, Senator Ibrahim Gobir, said the upper chamber never spent over N4 billion to purchase 108 cars for lawmakers. According to him, only 36 SUVs were bought at the cost of N36.5 million each. He said: “We had a close session and they agreed that we should give one car per state; we sat down and agreed on who among the three senators from each state needs the car most and that was what happened.” Gobir, who wondered  why Nigerians would kick against the purchase of new exotic cars, said as senators they were entitled to official cars.