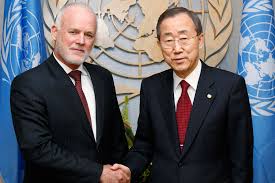 Kasoulides polled ninety votes out of a total of one hundred and ninety-two votes collated, with seven votes invalid.

Made up of all the one hundred and ninety-three Member States of the United Nations, the General Assembly provides a forum for multilateral discussion of the full spectrum of international issues covered by the UN Charter.

It meets in regular session intensively from September to December each year, and thereafter as required. The seventy-first Regular Session will convene at the UN Headquarters on the thirteenth of September, 2016.