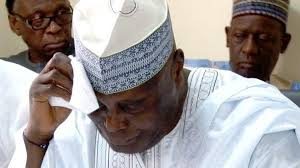 The Supreme Court has dismissed the appeal filed by the Peoples Democratic Party and its presidential candidate, Atiku Abubakar, challenging the victory of President Muhammadu Buhari in the presidential election of February 23, 2019.

A 7-man panel led by the Chief Justice of Nigeria, Justice Tanko Muhammad, dismissed Atiku’s appeal for lacking in merit. Speaking on behalf of the panel, Justice Muhammad stated that members of the panel had read all the documents and exhibits filed in the case for about a fortnight, within which the panel discovered that the appeal is lacking in merit.

The CJN noted that the reason for the apex court’s decision would be made known on a later date which would be communicated to all concerned.

Atiku and his party had jointly filed their appeal before the apex court to challenge the judgment of the Presidential Election Petition Tribunal which had dismissed their petition challenging the outcome of the February 23, 2019 poll.