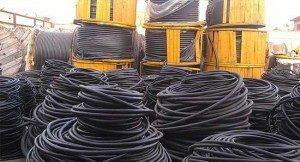 Substandard electric cables running into millions of Naira have been confiscated by the Standard Organisation of Nigeria (SON) in Plateau State, north central region of Nigeria.

Nine of the shops selling the fake electrical products were also sealed.

Several rolls of electrical cables were tested during the operation that lasted for several hours with security men at hand to provide security.

Although there was not much resistance from the shop owners while the operation lasted, some of them expressed displeasure with government’s approach to the raid.

Some have suggested that more efforts should be geared towards enlightening the public and consumers on ways of identifying such fake and substandard products which will save lots of lives from the hazards of such products.

The Plateau State head of the SON, Musa George, said that the raid on the electrical shops selling fake and substandard cables to unsuspecting members of the public is to ensure that only goods that meet the requirements of relevant Nigerian industrial standards are in the market.

He revealed that the operation will also be extended to other sectors of the economy.

Operating income was down 2% to $18.23bn in a “tough year”, said chief executive Peter Sands.

“2014 performance was disappointing, impacted by a challenging market environment and by the significant programme of restructuring and repositioning actions taken during the year,” he said.

He had been under pressure over the bank’s slumping share price.

The bank’s chairman, Sir John Peace, is to step down in 2016 and three non-executive directors are also leaving.

The bank has been facing tough market conditions for some time and has issued three profit warnings in the past 12 months.