Another series of winners have emerged in the ongoing Spell and Win “Bag of Goodies 2” Consumer Promo.
The Spell and Win “Bag of Goodies 2” Consumer Promo launched by Dangote Cement Plc to reward and improve the livelihoods of its consumers around Nigeria saw Nine Lucky winners go home with One million naira each at the event held in Ilorin , kwara state capital.
One of the winners Oyinloye Khadijat Bolanle from Omu-Aran , kwara state who could not hold her excitement said ” I had initially expressed doubts about the promo until now that I have received the one million naira credit alert from my bank without any deduction ,I am grateful to God and Dangote cement “
Funmi Sanni ,Marketing director , Dangote Cement PLC , who spoke with newsmen at the event said ” the promo was packaged for Dangote Cement loyal consumers  particularly at this time to ensure a speedy economic recovery from COVID-19 impact ” .According her one thousand Nigerians will smile home with one million naira each in the Bag of Goodies 2” Consumer Promo
which ends by 15 November 2020. 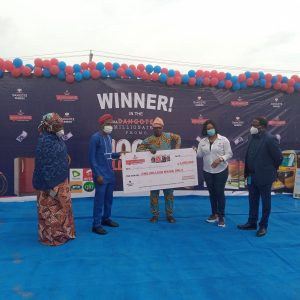 Another winner Tayo Matthew from Ibadan , Oyo state Nigeria expressed joy that he won describing the moment as his happiest in recent time. “I am an Engineer, I work on site where we bought  promo bag of Dangote Cement during this  promo period, I picked out the scratch card inserted in the bag and scratched till I got D-A-N-G-O-T-E.
Also speaking at the event , National Sales Director Dangote Cement PLC , Adeyemi Fajobi said to be a part of the promotion, “all the consumer needs to do is to buy any promo bag of Dangote Cement during promo period, pick out the scratch card inserted in the bag, scratch open the inserted card to see what you have won, go to the nearest redemption center to collect your prize “.
Besides, consumers also stand a chance to win tricycles, motorcycle, television sets, refrigerators, Dangote Food Goodies packs, recharge cards and many other exciting gifts , Fajobi added.
The Spell and Win “Bag of Goodies 2” Consumer Promo expected to produce 1,000 millionaires within 16 weeks will end by November 15,2020.
Tagged as Dangote ilorin kwara promo