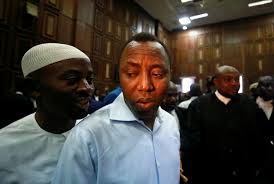 Detained political activist and publisher of Sahara Reporter online news platform, Omoyele Sowore, has embarked on a hunger strike over the refusal of the State Security Service (SSS) to set him free after meeting his bail conditions. In a statement issued today, his lawyer, Femi Falana, said Mr Sowore has refused to eat or see anybody in protest that his rights are being violated.

In a related development, Mr Falana, a senior advocate of Nigeria (SAN), has threatened legal action against the SSS, for refusing to release Mr Sowore. A federal high court in Abuja had on Wednesday ordered the release of Sowore alongside Olawale Adebayo better known as “Mandate”.

The DSS acknowledged receipt of the document but refused to obey the directive. In a statement on Thursday, Falana said this is the second time the DSS would ignore court order to release Sowore.