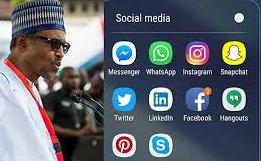 The Senate has re-introduced a bill that will regulate the use of social media in Nigeria.

The sponsor of the legislation, Mohammed Musa, said it will curb fake news on the internet and protect the nation’s “fragile unity”.

A similar anti-social media bill introduced by the previous eighth Senate, sparked outrage across the country, and was later withdrawn. The old bill sought to compel critics to accompany their petitions with sworn court affidavit, or face six months imprisonment upon conviction.

Speaking with journalists in his office, Mr Musa, said the new bill titled, ‘Protection from Internet Falsehood and Manipulations Bill, 2019’ is for “patriotic Nigerians” who want to see the country live in peace. He noted that the bill is not an attempt to gag the social media or right to free press.

The lawmaker said false information has been disseminated so many times and has caused so many chaos in different parts of the World, citing examples of the spread of fake news on the internet during the recent xenophobic attacks in South Africa.

He said the bill proposes a fine of one hundred and fifty thousand naira or three years imprisonment for any offender. Recently, Lai Mohammed, minister of information and culture, said the federal government was working on sanitizing the social media.