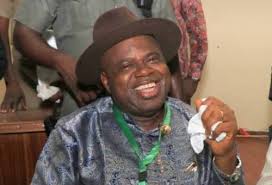 The Senate leader, Senator Ali Ndume, at the weekend, painted a gloomy picture of what could befall the northeastern part of Nigeria, if drastic and proper measures are not forthcoming to address the prevailing malnutrition crisis in the region.

Ndume said Boko Haram onslaught has displaced millions of Nigerians, including women and children, leading to creation of Internally Displaced Persons (IDPs) camps, mainly in the affected states of Borno, Yobe and Adamawa.

He noted that the prevailing crisis of malnutrition in the area is capable of causing a larger war than the one being waged against the insurgents.

Ndume spoke at a cocktail party in Abuja to mark the end of official Launch of the Wife of the President, Aisha Buhari’s Get-Involved Initiative, aimed at stemming malnutrition in the area.

Human rights lawyer, Femi Falana (SAN) has asked the Accountant-General of the Federation to ensure that federal legislators are made to refund the money collected for the number of days they failed to sit in the National Assembly. He said this in a public lecture he delivered at the investiture of Dele Ojogbede as the President of Rotary Club, Ikoyi, Lagos on Sunday.

Falana said due to incessant recesses embarked on in the last legislative year which ended on the ninth of June, 2016, the Senate only sat for ninety-six days while the House of Representatives sat for one hundred and four days out of the one hundred and eighty-one days which the Constitution stipulates as mandatory for the two chambers of the National Assembly to sit in the period. The lawyer argued that since the labour policy of ‘no work no pay’ is applicable to all public officers, the federal legislators ought not to have been paid for the period they failed to perform their duties.