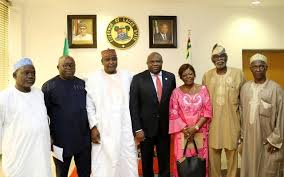 Revenue Mobilization Allocation and Fiscal Commission (RMAFC) has disclosed that four out of the Aje oil wells have now been attributed to Lagos State for the purpose of disbursement of the thirteen per cent Derivation Fund to it. Chairman, Indices and Disbursement Committee of the Commission, Alhaji Aliyu Mohammed, made the disclosure on Wednesday, when he led his members on a courtesy call on the Lagos State governor, Akinwunmi Ambode, at the Lagos House, Ikeja.

Ambode, in his remark, said that the commencement of crude oil production in the State will, in no small measure, enhance the economy of not just the state but the nation in general.