The collective action by the National Association of Resident Doctors (NARD), which accounts for 40 per cent of doctors, is the latest strike on the list of others by doctors in Nigeria.

“We have kicked off the strike today,” NARD president Aliyu Sokomba said, adding that doctors treating virus cases would join the action this time around.

“There will be no exemptions,” he said.

Sokomba said long-standing issues such as provision of life insurance, a pay rise, payment of salary on time as well as provision of adequate facilities for doctors were the reasons for the strike.

“These are the issues we have and they appear not to have been addressed up till this day,” he said.

“It is an indefinite strike,” Sokomba said, adding that it would be called off only when the union’s demands were met.

Strikes by medical practitioners have been common in Nigeria where the health sector is underfunded.

The authorities fear any reduction in capacity could severely hamper its ability to tackle the pandemic as the number of cases continues to rise.

In June, NARD staged a week-long strike over welfare and inadequate protective kits but doctors treating virus cases remained on the job. 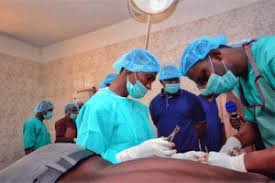 The Southeast Caucus of National Association of Resident Doctors (NARD) has called for improved healthcare infrastructure in the South-East region.

They decried the deplorable condition of state-owned hospitals in the region and its degenerative effect on healthcare delivery. Dr. Chikezie Obasi, the Leader of the caucus, made this known at a news conference at the Abia State University Teaching Hospital, Aba, on Sunday.

Obasi said that the decline in the quality of healthcare services rendered by state-owned university teaching hospitals with the poor welfare of healthcare workers was a cause for concern.

According to him, the current situation has led to the continued resignation of many doctors and health workers, as well as jeopardising the vital training of undergraduate and postgraduate doctors.

Besides, he appealed to the Nigerian Governors’ Forum to initiate and actively implement programmes that would boost the provision of good quality healthcare services in the 36 states of the federation.

Written by Morenike Adebayo on September 13, 2016

The National Association of Resident Doctors has asked the federal and state governments to resolve all outstanding issues in the health sector before the thirtieth of September or face an industrial action by its members. Newly elected President of the association, Dr. John Onyebueze, gave the ultimatum at the end of NARD’s twenty-sixth Annual General Meeting in Enugu.

Onyebueze laments the poor state of some teaching hospitals in the country where consumables like bed sheets, gloves, paper, power generating sets are lacking, which have plunged medical facilities to an abysmal state.

He demands the immediate implementation of pending agreements between the government and health workers, warning that the association cannot guarantee industrial harmony in the health sector if this persists beyond the payment of September salaries.

Onyebueze also calls for urgent action against poliomyelitis and Lassa fever and says the association said it does not agree with the ‘no work, no pay’ rule canvassed by the government during industrial actions. 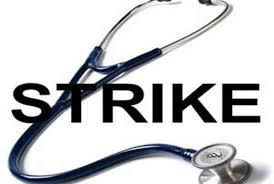 The National Association of Resident Doctors (NARD), on Monday, embarked on indefinite industrial action over unpaid salaries. The president of the Obafemi Awolowo University Teaching Hospital chapter of the Association, Dr Wole Ayegbusi, said the strike has become inevitable over the indifferent posture of the Federal Government to their plight.

Ayegbusi, who hinted that efforts have been made by NARD to dialogue with the Federal Ministry of Health on several occasions, regarding the unpaid salaries, regretted that such dialogues have failed to yield positive result.

Meanwhile, the Borno State chapter of the Association has said its members will not participate in the nationwide strike. The state acting president of the association, Dr Muhammad Abdullahi, in a statement said Maiduguri is a war theatre, comprising men of the Nigeria Army, and inhabitants who need the doctors’ support in terms of provision of health care services. 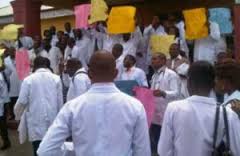 The National Association of Resident Doctors (NARD) has said there is no going back on the twenty-one-day ultimatum issued to the Federal Government unless the association’s demands are met.

The Public Relations Officer of NARD, Dr Eugene Uhuaba, said in Lagos, on Tuesday, that no meaningful agreement has been reached at the series of ongoing meetings between the association and the government.

NARD, had on the fourth of April, given the government a 21-day notice to meet their demands or face an indefinite strike. Their demands include payment of members’ salaries up to date and appropriate placement of members in states and federal tertiary hospitals across the nation.