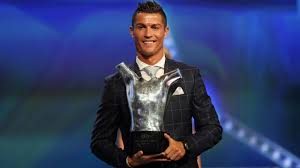 Ronaldo received the accolade for the second time in his career after finishing ahead of Real team-mate Gareth Bale and Atletico Madrid’sAntoine Griezmann.

The award is voted for by journalists from each of UEFA’s fifty-five-member associations.Barcelona and Argentina skipper, Lionel Messi, won last year’s award.

In the women’s category, Ada Hegerberg from Sweden was awarded European Women Player of the Year.