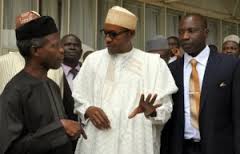 The Presidency has refuted claims of involvement in illegal recruitment in federal agencies such as the Central Bank of Nigeria, CBN, the Federal Inland Revenue Service, FIRS, Nigerian National Petroleum Corporation (NNPC), among others.

This follows allegations that recruitment into the agencies did not follow due process, as beneficiaries were children and close pals of government officials.

Denying the allegation while speaking to reporters in Abuja yesterday, the Senior Special Adviser on Media and Publicity to the Vice-President, Laolu Akande, noted that the government is working on making the public service systems more transparent.

Speaking on the various job creation initiatives by the administration, Akande noted that applications are already being received for the graduate employment scheme in a transparent and verifiable manner.

He also addressed the non-inclusion of the private sector in the federal government’s Economic Management Team, as was the case in the Goodluck Jonathan administration, stating that the decision was taken to prevent conflicts of interest.