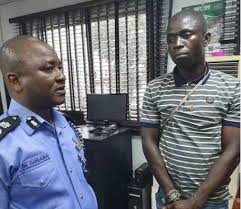 The River state police command has arrested Gracious David West, an alleged serial killer in Port Harcourt, capital of Rivers state. In a series of tweets on Thursday, the police said the suspect was arrested while en route Uyo from Port Harcourt.

About eight young women have been murdered in different hotels in the state in the past two months. The bodies of these ladies were said to have been found in similar conditions, strangled and with a white piece of cloth tied around their necks.

According to the Force, the twenty-six-year old killer from Buguma LGA of the State, who is also a member of the Degbam cult group was arrested along East-West Road en-route to Uyo from Port Harcourt.

Commissioner of Police Rivers State, CP Mustapha Dandaura who will be briefing the media on this significant arrest later today, said that the suspect has since made useful statements to the Police.

Mr Dandaura further stated that investigation is on with a view to ascertaining the suspect’s motives and possible accomplices. The arrest is coming after various groups protested the killings of young women in hotels across the state.