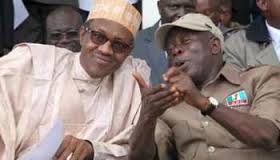 The Governor of Edo State, Adams Oshiomole, on Wednesday clashed with a former Governor of Cross River State, Donald Duke, and ex-Niger State Governor, Babangida Aliyu, over the poor performance of the economy and decline of the Naira. At the public lecture organized by the Kukah Centre for Faith, Leadership and Public Policy, Oshiomhole condemned the previous Peoples Democratic Party government. He said crass corruption and looting, which characterized the PDP sixteen years in power, are responsible for Nigeria’s current economic crisis.