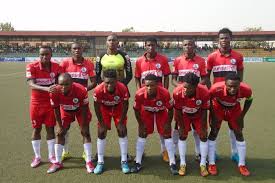 Rivers United defender, Ofem Inah, has been suspended for three matches after he picked up a red card in the club’s Nigeria Professional Football League (NPFL) match against Shooting Stars Sports Club (3SC) in Ibadan on Saturday.

The left-back was shown a straight red card for barging into 3SC’s Nojeem Olukokun shortly before half time in the game which United eventually lost zero-one with Wasiu Jimoh converting the ensuing penalty, awarded after the incident.

Inah will now miss United’s next three league games beginning with Wednesday’s NPFL clash against his former club, Sunshine Stars in Port Harcourt on the twenty-third of March.

He will also miss the match against Ikorodu United in Lagos on the twenty-seventh of March and the game against El-Kanemi Warriors in Port Harcourt on the sixth of April.

He is the second Rivers United player to receive a three-match ban this season after defender, Ayobami Asekunowo got the marching orders in the club’s two-three reverse to Niger Tornadoes in Lokoja on the thirteenth of March, 2016.