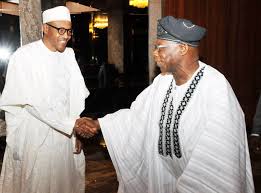 Former President Olusegun Obasanjo has denied report that he has warned President Muhammadu Buhari against seeking re-election in 2019. The former president was reacting to the claim made by Alex Nwokedi, his former chief press secretary that Obasanjo had warned President Buhari not to contest in the 2019 presidential election.

In a statement issued on Sunday by his media aide, Kehinde Akinyemi, the former President said he has not spoken to his former press secretary in three years and wondered how he got the information.

The former president described the news as false and destructive and said he is not against Buhari contesting for presidency in 2019. Obasanjo went on to say that nobody has the right to advise his children not to seek for elective post, adding that it is part of the freedom of democracy.

Obasanjo said he is still committed to the peace and progress of the country’s democratic development, which he assures, will bring relief in no distance future with patience and understanding of the country’s masses.