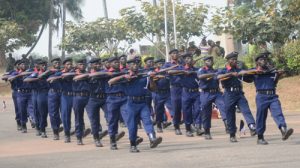 PIC. 27. MEN OF NIGERIAN SECURITY AND CIVIL DEFENCE CORPS ARMED SQUAD
BATCH ‘A’ IN OYO STATE AT THEIR PASSING OUT PARADE IN IBADAN ON FRIDAY
(21/12/12).

Agu, who gave the warning during raids on filling stations in the state, said errant marketers would be arrested, detained and dealt with according to the law.

The operation was carried out in conjunction with officials of the Department of Petroleum Resources, Bayelsa office.

During the operation, the two federal agencies visited stations, particularly in Yenagoa metropolis, to enforce the regulated price of N86.50.

Agu said, “Let me sound it loud and clear that diversion of petrol is prohibited. Anyone caught diverting products meant for Bayelsa to another place will be decisively dealt with. My men will be on a 24-hour surveillance and patrol.

“And those people involved in black marketeering are warned in their own interest to stop. Henceforth, anyone caught selling with jerry cans will be made to forfeit the fuel and will be detained.

“We are aware that some filling stations sell only at night to rip customers off. We have mandated our operatives to henceforth patrol in the midnight to fish out errant marketers. We are poised to ensure that fuel consumers do not suffer in Bayelsa.”

In his comment, the state Controller of Operations, DPR, Asuquo Antai, said fuel supply to the state had improved in the last few days.

He wondered why operators of filling stations still chose to sabotage the government and inflict pains on consumers.

The Operations Controller said, “The government has emphasised times without number that all retail outlets should sell at N86.50. We have embarked on this operation to enforce government directive.

“Most of the filling stations have not been selling at the appropriate price. We had a meeting with independent marketers on the issue. We have told them that henceforth, they should sell at the regulated price or face severe sanction.”