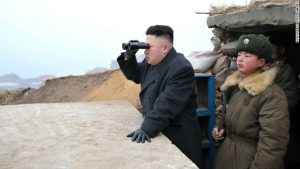 The missiles were fired from the Sino-ri location north-west of the capital, Pyongyang, towards the east. They travelled 420km (261 miles) and 270km

The tests come as a top US envoy has arrived in South Korea for talks on how to break the deadlock over nuclear negotiations.

Analysts say the North is trying to increase pressure on the US over its failure to make concessions.

A meeting in Vietnam between North Korean leader Kim Jong-un and US President Donald Trump ended without agreement in February. Mr Trump walked away from what he described as a bad deal offered by Mr Kim.