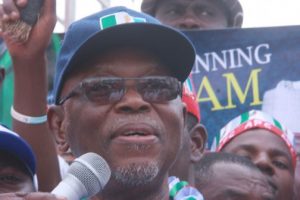 The National Chairman of the All Progressives Congress, Chief John Odigie-Oyegun, has said that despite the allegation of partisanship against President Muhammadu Buhari’s anti-corruption war, the party owes no one any apology.

Chief Odigie-Oyegun spoke with State House correspondents after a meeting the party’s National Working Committee members held with president Buhari at the Presidential Villa, Abuja. His statement was a reaction to the allegation that the ongoing anti-corruption war is aimed at further decimating the opposition Peoples Democratic Party.The APC chairman, however, said the party’s position was that the rot in the country must be cleansed, irrespective of whose ox was gored.