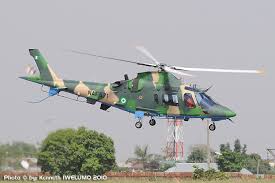 The agreement is aimed at ensuring adequate maintenance of the Air Force’s air fleet.

It was announced by Air Vice Marshal James Gbum, who led a delegation of top senior officers of the Nigerian Air Force on a visit to Anambra State Governor, Willie Obiano, at the Governor’s Lodge in Amawbia.

Air Vice Marshal Gbum said the present administration had heightened efforts to improve research and development and that an order by the Chief of Air Staff had brought about the discovery of Innoson Vehicle Manufacturing Company.

With the agreement, the Nigerian Air Force hopes to surmount the challenge of searching for spare parts in several countries around the world which had led to the grounding of many of its aircraft.

The leader of the team said the automobile manufacturer passed the test of assisting in manufacturing brake assemblage haulage for activation of grounded aircraft which would in turn step up operation in the northeast against Boko Haram.

According to him, the collaboration will also encourage indigenous manufacturing.

At the Big Chamber of the Governor’s Lodge, Amawbia, was an array of senior officers of the Nigerian Air Force led by the Air Vice Marshal who represented the Chief of Air Staff on a courtesy call on Governor Obiano.

At a meeting with the Governor, the Air Force official told Governor Obiano that Innoson would commence the manufacturing of spare parts for the numerous fleet of the Nigerian Air Force.

The Governor expressed pride that Anambra State had offered a solution to one of the problems of the country and assured the delegation that he would be ready to assist in any way to ensure that they got the best in their mission.

He also congratulated the management of Innoson Vehicle Manufacturing Company for its competence and standard and urged the Nigerian Air Force to continue with the effort in containing insurgency, as the nation would always appreciate their contribution.

The Nigerian Air Force delegation presented a souvenir to the Governor and afterwards a group photograph was taken as a memoir of the unprecedented visit.