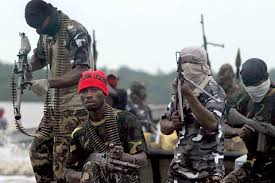 Bayelsa State Governor, Seriake Dickson, has said military option is not the right solution to the renewed violence in the Niger Delta being orchestrated by the Niger Delta Avengers. He restated that dialogue remains the only way out of the situation which has led to a sharp drop in the nation’s resources.

Dickson spoke with State House correspondents after meeting with President Muhammadu Buhari at the Presidential Villa, Abuja on Wednesday. He was reacting to a recent statement credited to the Chief of Army Staff, Lieutenant-General Tukur Buratai, that the Nigerian Army will not hesitate to use force should the ongoing dialogue between the Federal Government and militants fail. The governor said dialogue will bring out the issues concerned while all stakeholders will unite around the common issues to move the country forward.