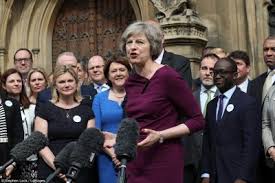 New UK Prime Minister Theresa May has made Boris Johnson, the former London mayor who led the Brexit campaign, foreign secretary in her new government. He replaces Philip Hammond, who becomes chancellor. Ex-Energy Secretary Amber Rudd is home secretary and Eurosceptic David Davis is the Brexit secretary. Ex-chancellor George Osborne was fired, bringing an abrupt end to his six years in charge of the Treasury. There were also reports that all of David Cameron’s political advisors had left Downing Street, a sign Mrs May is determined to break with the past.

On arriving at Downing Street, The UK’s second female prime minister vowed to lead a government that works for all, not just the privileged few. She promised to give people who were just managing and working around the clock more control over their lives.