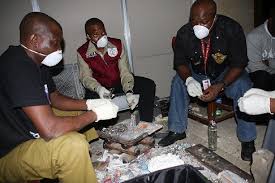 The National Drug Law Enforcement Agency (NDLEA) says will evolve proactive methods of checking what it described as drug addiction among the Internally Displaced Persons (IDPs) in various camps.

Mr Ona Ogilegwu, the Commander of the agency in Borno, said this in an interview with the News Agency of Nigeria (NAN) in Maiduguri on Sunday.

He observed more than 2,000 IDPs in Borno camps were chronic addicts of illicit drugs and solicited the inauguration of a committee on drug abuse in camps.

According to Ogilegwu, none of the 28 camps in the state capital is free from addiction of Indian hemp, cocaine and diazepam, among other substances.

He stressed that the officials of the agency had, on many occasions, intercepted such substances from peddlers that sold them to the IDPs.

“The government should set up committee on drug abuse comprising NDLEA, military, State Emergency Management Agency, WHO and psychiatric institutions to handle the menace of drug activities in camps.

“There is an increase in mental disorder cases associated with drug abuse in Federal Neuro- Psychiatric hospitals due to Boko Haram insurgency.

“Setting up of the committee is important as the Borno government will soon start the process of transporting these IDPs back to their homes as part of its rehabilitation, reconstruction and relocation effort.

“They should also set up machineries to check drug addicts among the IDPs so they don’t go back and constitute nuisance.

“Allowing the IDPs to go unchecked is like incubating bunch of addicts into the society; we are mapping out aggressive enlightenment campaigns on how to check drug peddlers and users,’’ he said.

NAN recalls that the NDLEA has, in recent time, expressed concern over illicit drug use in IDPs camps following the arrest of a drug peddler in Dikwa, Borno.

The agency arrested a middle aged Baba Haruna, while attempting to sell drugs, including cocaine, to addicts within a camp of IDPs.(