NBBF calls up 27 players for Rio

The Nigeria Basketball Federation (NBBF) has released its preliminary list of twenty-seven players invited to the men’s national team training camp ahead of the 2016 Olympic Games.

NBBF President Tijani Umar, while unveiling the list at a media briefing yesterday in Abuja, said the Federation had made efforts to ensure the best available players are considered for invitation to camp. 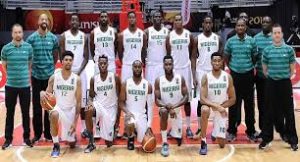 The African champions, known as the D’Tigers, qualified for the Olympics after winning the 2015 Afrobasket in Tunisia.

Umar said the players, who were a mixture of home-based and overseas-based players, were being expected to report to camp in Los Angeles or Bakersfield in the U.S. on the twenty-seventh of June. The Olympics is scheduled for the fifth to the twenty-first of August in Rio, Brazil.