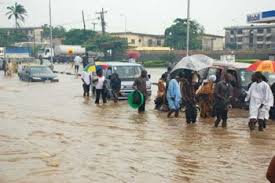 The National Space Research and Development Agency (NASRDA) has said fifteen states in parts of the country may lose two million hectares to flood with potential impact on agriculture and settlements’ displacement. The Head of Media and Corporate Communications of the agency, Mr Felix Ale, disclosed this in a statement in Abuja.

Ale said the areas were identified following a preliminary research and analysis conducted by the agency on flood-prone areas. The affected states, according to Ale are Taraba, Benue, Kogi, Plateau, Nassarawa, Kebbi, Edo, Delta and Anambra. Others are Rivers, Bayelsa, Lagos, Sokoto, Kano and Niger.

NASRDA consequently appeals to the affected state governments to urgently put adequate measures in place for the relocation of communities in the flood prone areas in their respective states to high grounds. It said this is in order to mitigate the colossal loss of lives and to prevent a repeat of the 2012 experience.

This comes as the death toll in the flooding that ravaged the Mararaba, Gurku, Kabayi and Ado communities in the Karu Local Government Area of Nasarawa State on Monday had risen to fifteen while scores are still missing.

A leader of one of the communities said no fewer than thirty-six houses were swept away in the incident while properties worth millions of naira were also destroyed.