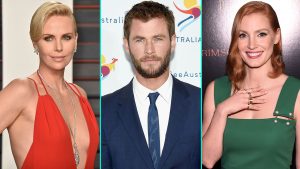 The first round of presenters for the upcoming twenty-fifth annual MTV Movie Awards has been announced. Model Gigi Hadid, actor Zac Efron, as well as “The Huntsman: Winter’s War” duo Chris Hemsworth and Jessica Chastain are confirmed to present MTV’s Golden Popcorn awards.

Theron gets three nominations for Best Female Performance, Best Hero and Best Fight for her scene with Ben Hardy, while Hemsworth is vying for Best Kiss for his steamy scene with Leslie Mann in “Vacation“.

But this year’s nominations list is dominated by “Star Wars: The Force Awakens” with eleven nods. Dwayne “The Rock” Johnson and Kevin Hart have been earlier announced as hosts for the 2016 MTV Movie Awards.